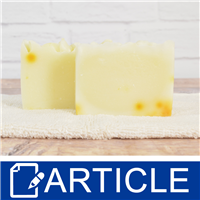 (Enlarge Image)
Knock, knock. Who’s there? Orange. Orange who? Orange you glad I didn’t title this article “Out, Damned Spot”? I have to admit that I lived most of my life blissfully ignorant of the Dreaded Orange Spots. You never see them on grocery store soaps. And my earliest cold-process soaps, made from lard and Red Devil Lye, were pristine bars of bubbly delight. Yes, life was good then, but it was not to last. Once I started really trying to make nice, fancy, luxurious, complicated soaps, I began to notice blemishes. I swore they had not been there when the bars were cut. I swore that I had not seen them on my early soaps. I swore that they didn’t really matter, because the soap lathered well, and surely nobody would notice a few innocuous orange zits. I just plain swore.

I supervise the research of three to five advanced undergraduate chemistry students each semester, and I thought it could do no harm to put one of them to work on this rather practical problem. The Case of the Dreaded Orange Spots eventually commandeered ten students over a period of two years, and began a new era in my academic career, with soap chemistry displacing quantum mechanics as my primary research focus.

I tell people that I make bad soap, on purpose, one bar at a time, to answer questions or solve problems. To study the Dreaded Spots, we first had to be able to produce them on demand. We also needed to be able to measure how orange they were. Since we expected atmospheric oxygen to be involved, we designed a soap holder that could be placed into a sealed vial (Figure 1). And to simulate the effects of aging, we placed these vials into an incubator held at a constant 60ºC (140ºF). Once a day over a period of about two weeks, we placed the vials on a flatbed scanner and used the GNU Image Manipulation Program (GIMP, a free competitor to Photoshop) to measure the “color saturation” of each soap: the measurable quantity that most closely indicated the “orangeness” of each sample. Soaps that were noticeably orange had color saturations of 30% or more.

A similar pattern was found for soap made from coconut oil, but to a lesser extent. While the color saturation increased for coconut oil soap stored in both oxygen and nitrogen, the effect of oxygen was less pronounced. In fact, neither soap reached the 30% mark, even after 300 hours in the incubator. We concluded that soap made from saturated fats is less susceptible to orange spots than those made from unsaturated oils. One potential solution to the problem is, thus, to use only saturated fats like coconut oil, palm kernel oil, palm oil, lard and tallow. Indeed, these are the oils most commonly used to make commodity soap, and perhaps this is why you never see orange spots on grocery store soap. But makers of handcrafted soap prize unsaturated oils, and so do their customers. Is there some way to protect these soaps from oxidation?

We tested several antioxidants: grapefruit seed extract, vitamin C, vitamin D, BHT and rosemary oleoresin extract (ROE). Each additive was tested at a rate of 0.1% of the oil weight. Of these additives, only BHT and ROE were effective in delaying the increase in color saturation. ROE is a natural product whose composition varies from batch to batch. We separately tested its major components, rosemarinic acid and carnosic acid, and found that rosemarinic acid is the more effective of the two.

In addition to oxygen, we found that dissolved minerals like calcium and iron accelerate the increase in color saturation. These minerals might be present in any of the raw materials used to make soap: water, sodium hydroxide and even the oils. While the use of distilled water would close off one source, we tested two chelating agents, sodium citrate and tetrasodium EDTA, commonly used on food and cosmetics. Of the two, only EDTA was effective.

Two single additives stood out as effective against preventing orange spots. Figure 3 shows the color saturation for olive oil soap, one made with 0.1% EDTA and the other with 0.1% ROE. Both of them delayed the onset of orange spots beyond 250 hours in our artificial aging experiments. Under reasonable storage conditions, we expect the protective effect to last much longer. Food grade EDTA is available at low cost, and is quite suitable for those consumers who do not object to a synthetic preservative. For consumers who value natural ingredients, look for ROE that is high in rosemarinic acid. The combination of 0.1% EDTA and 0.1% ROE is even more effective. With these preservatives at their disposal, makers of handcrafted soap can continue to use unsaturated oils without suffering the blight of the Dreaded Orange Spots. 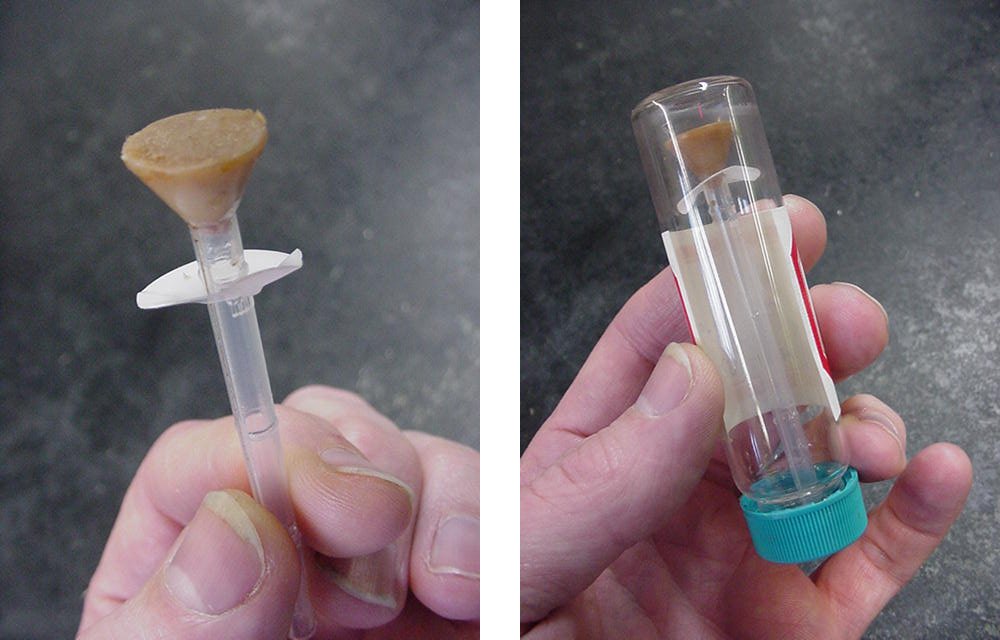